How to Accomplish Multi-instance I/O Mapping

Say I’m running a process definition that allows a user to report the hours they work based on a list of projects. 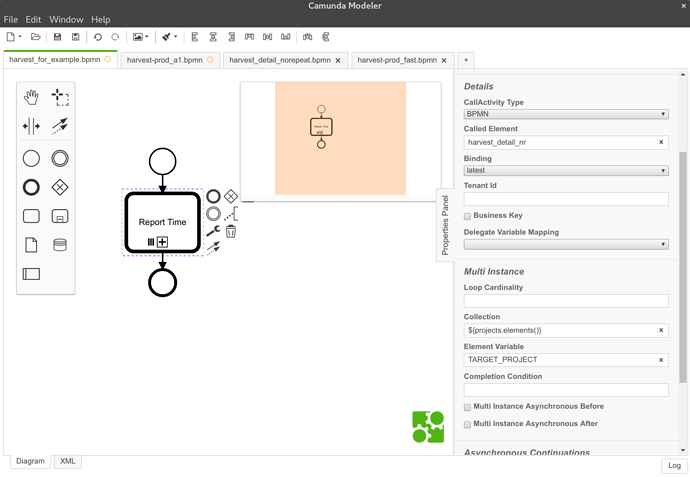 All works fine, but now I want the parent process to known which projects the user actually reported on, Basically, I want to retain projects on that list that the user reports on, and to remove the ones they don’t report on.

I know I can store this information out-board, but I have a good reasons to want to keep all my process related state on the process. It seems to me a pretty common use case.

The only way I can think of solving this problem is to pass the parent process id into the sub-process and then to update the process variable in the “Send to Harvest” message task.

Is there another way?

Thanks for responding. I did not realize the execution listener has access to both the sub process variables and the parent process (execution). If this is true, it might work perfectly.

You have to Map the Output Variables on the parent process. See the DMN example in the link.

I see this. This is all I have to do?

Yup. You are just getting, updating and setting the variable.

It’s actually not so simple, when you use a subprocess, instead of a dmm task, all of the local subprocess variables are gone by the time you listen to the end event. I may yet have a workaround, but this is much more difficult than it ought to be.

@rmoskal, take a look at the following BPMN example which is a fully working example.
If this is not your usecase, then please provide more details of what you are trying to do. 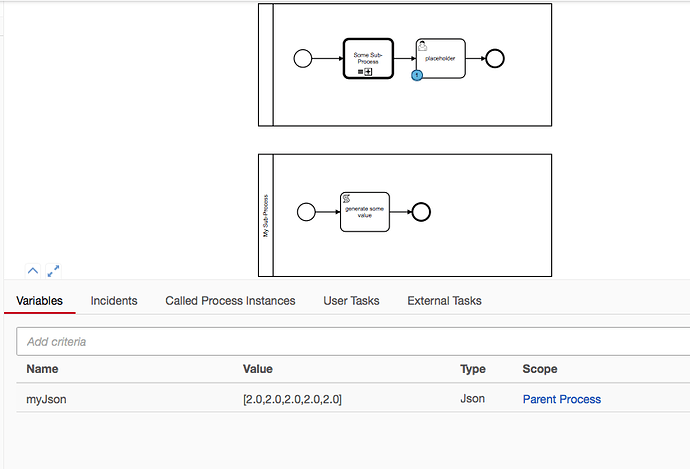 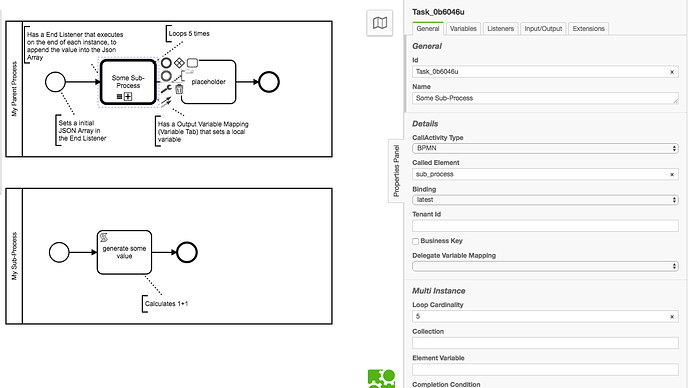 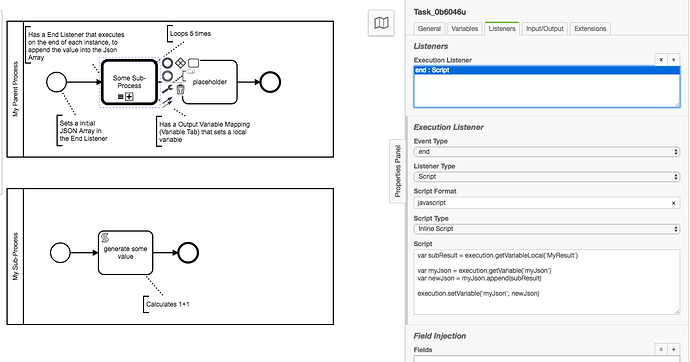 edit: fyi/reminder to run the multi-instance in sequential or you will have optimistic locking kick in as multiple instances are trying to update the parent-process’ process variable at the same time.

Thanks for that! The trick was in mapping the variable on the CallActivity:

That step wasn’t obvious from the DMN example, though I think you mentioned it.

I mean this to be an operation that will be used across many process and wound up implementing a delegate listener on the sub-process end state and then setting a variable on the DelegateExecution SuperExecution.

Any reason to prefer your method?

I mean this to be an operation that will be used across many process and wound up implementing a delegate listener on the sub-process end state and then setting a variable on the DelegateExecution SuperExecution.

A listener sounds like it would be a good use case.

@StephenOTT I have a question. Based on the spec of Caumnda, Mulit-Instance doesn’t support output mappings. As each instance output data to the same variable, the different instance maybe overwrite the variable.
Is it possible the end listener on your “Some sub-Process” task gets the variable which had been overwriten by other instance? If so, the result is not as we expected.

Not sure I understand your question. Can you provide more info?

On the example parent-sub.bpmn model, a out mapping variable “MyResult” was setup for Multi-Instance task “Some Sub-Process” as follows. 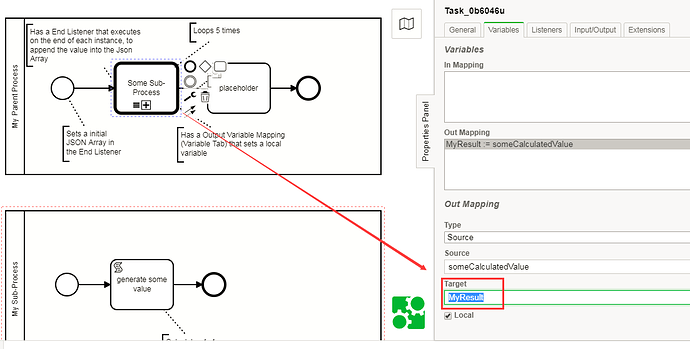 YOu are correct that the docs to say that. BUT in my example you will see how we use the end listener mapping in the listeners to use a script to append a single variable. Every time the sequential instance completes, it appends to a existing variable. (“Adding to the existing list”)

@cheppin This statement is valid for embedded sub-processes. If you change the call activity to an embedded sub process, you will notice that “Output Parameters” section in “input/output” tab is vanished.

This brings me to my question. I am taking liberty to ask the question in the same thread rather than opening a new one as the heading is “How to Accomplish Multi-instance I/O Mapping” and it’s not specific to Call Activities.

@StephenOTT Do you have any idea how we can achieve this when it’s a multi-instance embedded subprocess? For instance, when in your pattern process array-input-dmn.bpmn if you also want the output of the individual subprocesses, how to achieve that? By setting super-execution variables?
BTW, your examples are winners!

Thanks and Regards
Chaitanya

@chaitanyajoshi if you want each output of a embedded sub process then you follow the same pattern as the dmn array loop thread. If you want all variables to be merged into a single in the parent then you need to use sequential multi instance. When you are saving your variable in the sub process, you should be able to access the variables of the main process. So you just need to update the main process variable with your additional data.

There are some weirdness to how embedded sub processes are executed: executions, instance ids etc.

Assuming your multi instance is not long running, then I would look at a solution such as https://github.com/StephenOTT/camunda-concurrency-helpers-process-engine-plugin so you don’t need to deal with the constant variable updates on the db.

There are some weirdness to how embedded sub processes are executed: executions, instance ids etc.

This is for serial multi-instance therefore the code is so straight forward. For a parallel multi-instance process, I would have had to create a container variable prior to starting the sub-processes and then add the local variable values to this container as had been explained in Stephen’s template.

@StephenOTT Once again, thanks for your help and directions. And ParallelUpdateMap plugin for Camunda is a brilliant idea!

Thanks and Regards,
Chaitanya

@StephenOTT I have a question. Based on the spec of Caumnda, Mulit-Instance doesn’t support output mappings. As each instance output data to the same variable, the different instance maybe overwrite the variable.

BTW, in Zeebe this pattern of collecting output from multi-instance activity is supported out-of-the-box, without any need of listeners:

The output of a multi-instance activity (e.g. the result of a calculation) can be collected from the instances by defining the outputCollection and the outputElement variable.

Very nice mechanism in Zeebe. I wonder if Camunda will follow?