The idea was from this old post above in this topic which was yours: 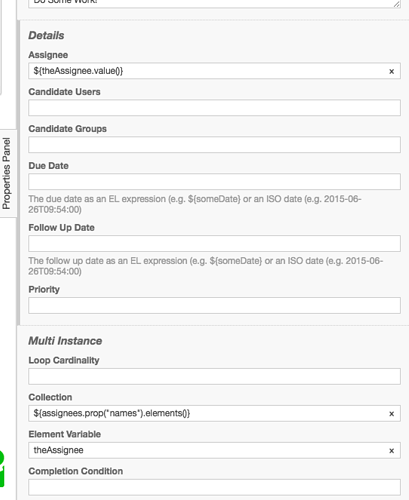 Look at the example:

Where the collection is the .elements(), but the element variable is just collName and in the Placeholder user task, i have ${collName}. There is no .value() because you are just reading from a list of strings. There is no KeyValue pairs / objects that are being read, this no .value()

You mean that in the Assignee Field of your Placeholder User Task you 've only written the Element Variable (collName). If I correctly understand, .value() refers to KeyValue pairs/objects?

In the image above, in the Title of the user task it shows ${collName}. That is a dynamic task title that is based on the value of collTitle.

Have you tested your code? Test with .value() and without .value(). Assuming you are building your object correctly with an array of strings, then it should work without the .value(). and should throw an error when using .value()

@StephenOTT thank you very much again for your time, glad to talk with you, but I’m going to log out now.
I will take into account anything you told me here today and I will let you know of course for the testing asap.

If you see again your post here Pattern Review: DMN Looping for Array Input and more specifically your part:

you had added the .value() to the Element Variable field of the Multi-Instance Business Rule Task.

And in another post of yours in this topic above, you had written to me this one:

where collection is an array of strings.

So, this is why I had added .value() in the Assignee field of my Multi-Instance User Task.

@StephenOTT what do you mean exactly by this one?

@steftriant look at the screenshot i posted. Look at the literal title of the task. It has a expression in the title.

@steftriant can you porovide a sample bpmn, form, etc that you are working with. I can help you with a working file set.

@StephenOTT you mean that a dynamic title of a task is the expression ${Element Variable}.
Yes, of course. My bpmn process scenario is this one:
diagram_1.bpmn (14.0 KB)

When you run your bpmn, do you get errors?

I haven’t run my bpmn yet because I’ve changed a bit my initial process scenario.

In addition, I was obliged to download the last edition release of Camunda BPM because I couldn’t run any web app with my previous one.

I run locally my process application in Apache Tomcat Server and I load any task form from my Eclipse IDE (html forms).

@StephenOTT, I will let you know of course for any possible error when I run my bpmn process.
My task names are in Greek.

I would like to ask you sth based on our last discussion here.
In my process scenario there are 6 groups of users.
Each one of those groups has 2 categories (roles) of users (Local Administrators & Representatives).
So, my question is how can I assign my parallel multi-instance user task to one of those 2 categories only (e.x. Representatives) ?
I ask this because in each one of my 6 groups some users are Local Administrators and some others are Representatives and I don’t know exactly how can I distinguish them

A screenshot of my process diagram 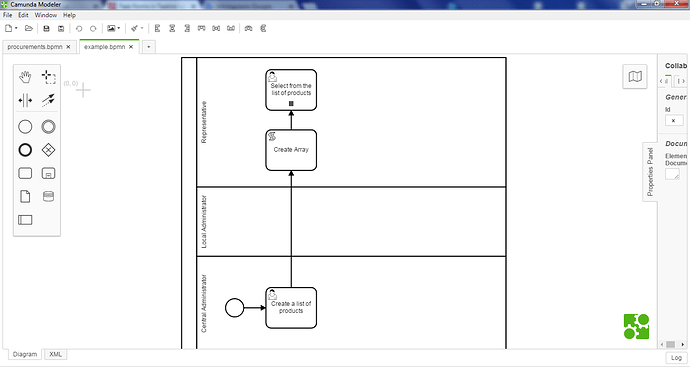 The inline script of my Script Task 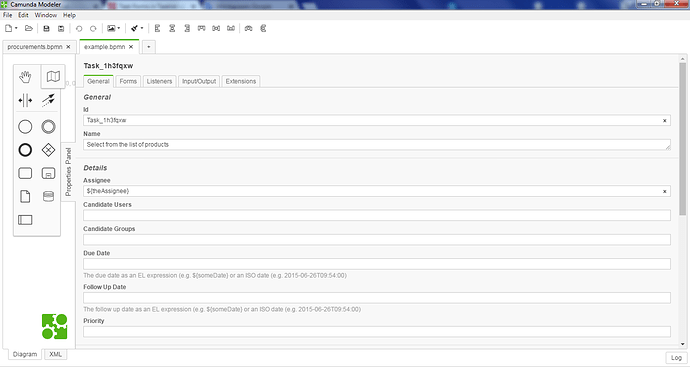 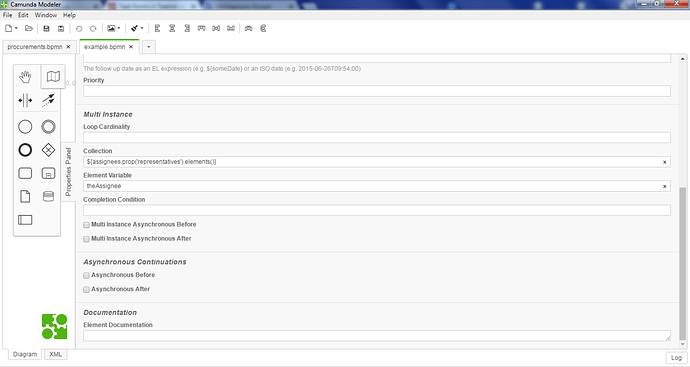 Thanks a lot in advance,
Steve

Can you provide a example of the data structure you have in your list?

Yes of course.
What do you mean exactly by data structure of my list?
I have 2 lists:
The list of products whose values are coming from my 1st User Task (Create a list of products) by camForm function as a JSON Array.
The list of users which is created in the Script Task (Create Array). But my issue is that I want to assign my 2nd User Task (Select from the list of products) only to users who have the role of Representative. And each one of my 6 groups is mixed as far as the role is concerned because some users are Representatives and some others are Local Administrators.
One solution could be to divide my users into these 2 categories based on their role in process but I 'm not sure if there is a better solution

This is why I posted yesterday the following here:

Can I classify users of the same group into 2 different categories? Cockpit / Tasklist / Admin & Web

Hi to all. I have defined 6 groups of users in my Admin console. In my process scenario, I have 2 different categories (roles) of users (representatives & administrators). Does anyone know please if I can classify (divide) users of the same group into 2 different categories? I ask this because in each one of my 6 groups, some users are representatives and some others are administrators and I want to make the assignment of tasks based on their role. Thank you in advance, Steve

Thanks a lot,
Steve

The way you are describing your data is confusing. You are mixing words of groups, roles, categories, products, arrays, etc.

(Select from the list of products) only to users who have the role of Representative. And each one of my 6 groups is mixed as far as the role is concerned because some users are Representatives and some others are Local Administrators.

The above does not make sense to me in the way you wrote it.

I ask that you break down your data structure and scenario in more clear and explicit step by step.

From what i can tell you have something like:

A list of Users who have Roles. A user can be a Admin or a Rep.
Each user is part of one “group”. There are 6 groups.
You have a list of products, and each product is part of 1 Group
Someone selects N products and for each product selected you want to assign the Admin and Rep of that Product to the User Task.

Ok, sorry if I was not so clear.

My issue is that I want to automatically assign only 1 instance of my 2nd user task (the parallel multi-instance) to all the users who have the role of Representative.

You cannot assign a single instance of a user task to multiple users.

Can you clarify this.

What do you mean?
If the task is multi-instance, you can’t automatically assign only 1 instance of this task to a number of users? I don’t want from the user to be obliged to claim the task in order to complete it.

You are talking about Multi-Instance: