I’m trying to have a process call the [ZeeBe Script Worker(GitHub - camunda-community-hub/zeebe-script-worker: Zeebe worker for script evaluation) and I’m having some trouble with how to set it up.

Which is great information, but I’m unsure how that maps to the Web Modeler form to call a Script Task: 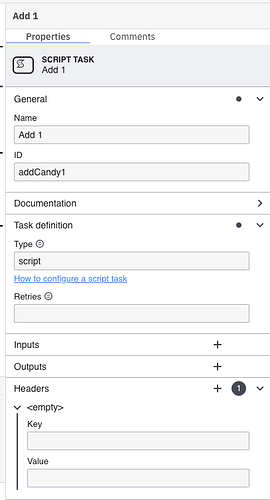 I gather that I should fill in the key/value pairs as in the XML example, but how do I tell the script worker the host that the script worker is running on (I fired up the Docker image from the ZeeBe Script Worker GitHub page).

The Script Worker needs to connect to the broker. This is done like this:

If you are running against Camunda Cloud (the SaaS hosted C8 instance), you need to configure the Script Worker like this.