While designing a bpmn diagram, by default we set the attributes as true for Executable and Startable as given in below diagram. 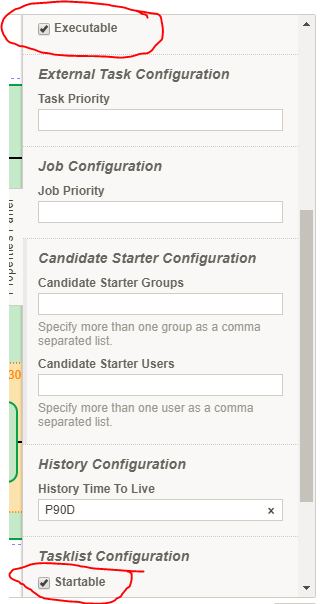 What happens if I set false to both attributes, in this case how process engine handles the bpmn model?

We can still start process instances for the process definitions which is false for both Executable and Startable ?

And what happens if i set false to either of the attributes?

Startable means the process will show up in Tasklist as a User-startable process when a user clicks the “Start Process” button. You would uncheck this for sub-processes that should only be Called by a parent process, or top level processes that users should not be able to start via Tasklist such as a process that is started via a Message Start Event and may not even have a default start event.

Can I use the Executable checkbox as a draft function？
And How can I get all of the Executable=false data from the act_ge_bytearray?