How to map DMN result to BPM process variable

I created a simple BPM flow where I created a Rule task to decide the assignee/candidateGroup of the next task. I created the variable decisionResult to hold the result of the rule task but when I try to access this variable in the execution listener attached to the user task next to it, I get the following error :

This error I get in the Postman from where I initiate the process through REST API.

I am attaching the screenshot of my BPM flow and the Java code for execution listener. Please advise. I tried the approach suggested by you but still I am getting same error. I removed the execution listener and commented the java code as well.

PFB the link to my project.

Contribute to harish2610/Camunda-Projects development by creating an account on GitHub. 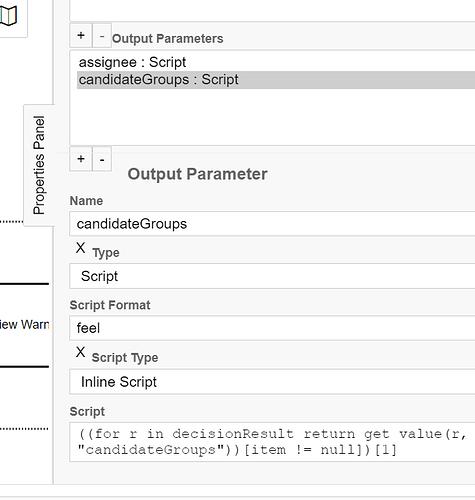 I was able to resolve the earlier error by renaming the decision result variable to dmnResult from “decisionResult” as I found below tip in the official documents.

But now I am facing another error :

This is the error I faced at the start and due to this I had to go via Java route as I don’t have proper understanding of FEEL script.

I am not sure, what changes I need to make to make it work.

Then I believe your first solution should work now.

This worked with Java after renaming the result variable. Thanks a lot for your time and providing guidance.