Is there a way to get the tasks which in a specified sub process instance?

Here is the process 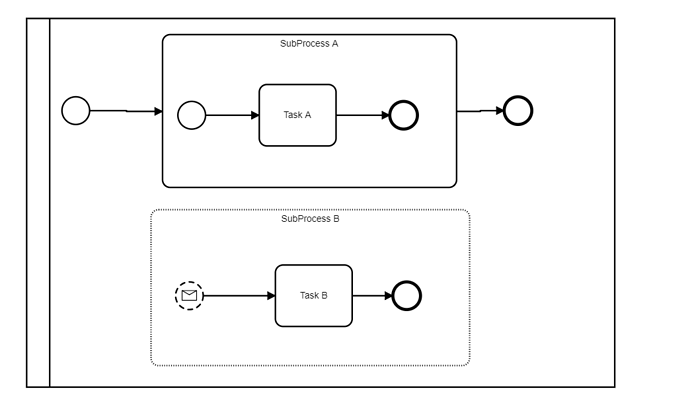 Let`s asume the process instance of above process definition have two task instance.
The first is Task A
The second is Task B

That means in the process instance have two running token on the two user task.

Is there a way to get the Task A only ? In other word that means ： How to get the tasks which in the SubProcessA sub process ?

I know the Camunda java api does not provided such api. But is there a way I can use mybatis directly connect to the ACT_RU_TASK table get the result ?

I researched a lot about the fields of the ACT_RU_TASK table but did not found such field which identify the parent activity of a task.

But there is no such field can help me to know which is the parent activity of a task.

@himly why can’t you query by Task definition key or task name?

Thank you for your reply.

If subprocess has more than one user tasks, you can retrieve only those tasks where the execution token flow through. Also the tasks will be ignored in exclusive gateway if the other path doesn’t match.

While parsing bpmn to retrieve subprocess tasks you can try something like this:

Note that, parsing bpmn model will give you the attributes/properties of the activity only.

Thanks.
The first solution looks like more match for my case than the second.
But I have a question ：
What the meaning of “Where the execution token flow through” ?
Can you please explan more about that ?

I find the doc about the execution at the Camunda documentations
https://docs.camunda.org/manual/7.11/user-guide/process-engine/process-engine-concepts/#executions

What the meaning of “Where the execution token flow through” ?

from the below example, after executing the service task the value evaluated and been set to variable X=12, then the execution path will be satisfying the condition X>10, so the task b wil be executed and task c will be ignored. Execution token can flow through the StartEvent > Task A > Exclusive Gateway > Task B > Exclusive Gateway > EndEvent.

then parse the XMl to C# object .