I am currently thinking about usage patterns / architecture and the respective data flow. Let’s assume you want to use Zeebe without any other middleware to orchestrate microservices. These microservices should not need to agree on the payload within a workflow instance. Rather I would see them as consuming and producing messages from/to Zeebe. 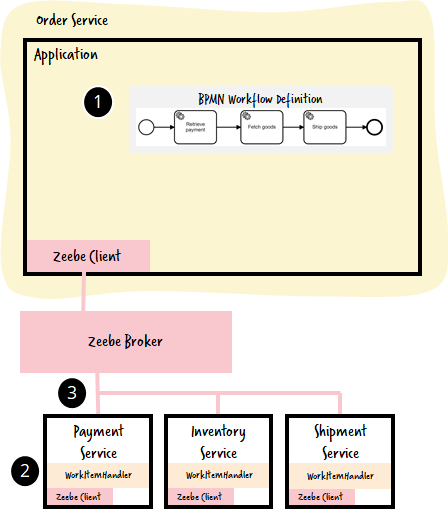 So e.g. in this scenario the OrderService deploys the model, but the CheckoutService (not on the pic - damn it) starts a workflow instance. But it should not create a fixed payload - but instead send in a message. Now I want to use an output mapping to read data from that message to store in the workflow instance payload.

Make sense?
Is this simply an open issue or did I even miss it?

Not sure I understand the use case and the no fixed payload aspect. Should a different set of microservices be able to use the same process definition, but with different messages (i.e. payload content)? How would it be possible to specify a mapping then?

See Change default behavior of output mapping of tasks - probably it is easier to handle this in one topic.