The above code runs successfully and the new deploymentId is printed out.

Later, I tried to list the deployed process definitions using the following code

The above code runs successfully but the output is always 0.

I’ve done some investigations and found that in the ACT_GE_BYTEARRAY table an entry with the corresponding deploymentId exists and the BYTES_ column contains that contents of the definitions file.

I have also found that there is no corresponding entry found in ACT_RE_PROCDEF table.

Is there something messing? from the API and the examples I found it seems that the above code shall suffice, or is there a missing step?

Thanks for your help

Make sure that definitionName ends on either .bpmn20.xml or .bpmn. Only then will the process engine interpret a deployment resource as a BPMN process definition.

Thanks @thorben ! that did solve the issue.

Leaving the following definitionName without the suffix is fine
repositoryService.createDeployment().name(definitionName);

Exactly. Please update your stackoverflow question as well, then others can benefit from it.

Hi
I have the same issue as tariqd described. I have a bpmn file called “Review_Camunda.bpmn”
and I copied the above code:

The code runs without error, it returns a valid deploymentID, but there are no entries in the above mentioned tables.
ACT_GE_BYTEARRAY, ACT_RE_PROCDEF

When I try to read a processInstance via

I get an error

What is wrong in my code?
Cheers, Roland

Is your process marked as executable, as described in the following post?

Pools are indeed supported - you can have 2 processes in the same file. The issue you're having is probably that your second pool is not marked as "executable" and so the engine treats it like documentation., [image] Lanes on the other hand have absolutely no bearing on execution. they're simply used for visualization.

Hi Thorben
yes, it is marked as executable (as you can also see in the screenshot of the bpmn file)
Cheers, Roland

A post was split to a new topic: REST API deployment question

where can I find the Camunda log file? Currently I use an embedded engine that is locally started via Spring Boot and Eclipse.

In the meantime I was succesful:

Now it works, strange! The entries in the DB are there and the process is started.

The differences to the former scenarios are: 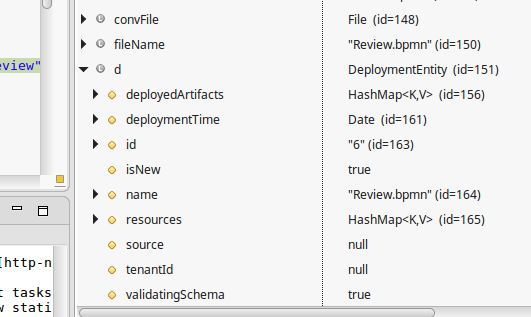 Can we not deploy only from string, Please see following code: