Looking for some community feedback:

I have a scenario I came across where you have a list you want to iterate through and find all of the matches.

The pattern that quickly hacked together was to use DMN to find all of the matches in a Collect List usage of the DMN.

You have a list of “Systems” and you want to get the list of the Managers of those Systems.

Notice that you could have the same “Managers” of different systems. In this scenario lets assume that only unique hits are supported, but we could also have scenarios where we have more than 1 manager per system and thus use Collect List Hit policy.

The complexity came as (far as i can tell), you cannot inject a “array” into a DMN. Example: Send a array of ["System 1", "System 3"], and have the DMN tell you the outputs/hits. The expected/desired output would have been ["user 1", "user 3"].

A scenario where this pattern seemed to be desired is when you want to get a list that use in a Multi-Instance sub-process. Example Scenario: A user fills out a form for System Access to various computers system in the organization. That form has a listing of “Systems” that are checked. This creates a array of “systems”. And lets assume that each system has a different “Manager”/user who needs to review the request.

So in this example a Form would have been filled out and the DMN determines which users need to review the request and the desired action is that each Manager of the systems would get their own Task to complete with the relevant information.

I believe I could have structured the DMN differently to support the desired list, but it did not seem manageable. Assume that we have hundreds of rules in the DMN with System to User mappings. The cleaner the file the better.

So in this BPMN I did the following:

I generate a fictional array in the Script task with Groovy:

The jsonValue is used a placeholder to append DMN outputs as we will see next.

I created a DMN and set it to Multi-Instance Sequential (basically iterate over the collection of “Systems” that would have been checked off in the Start Form).

The DMN Map Decision Result is set for SingleResult 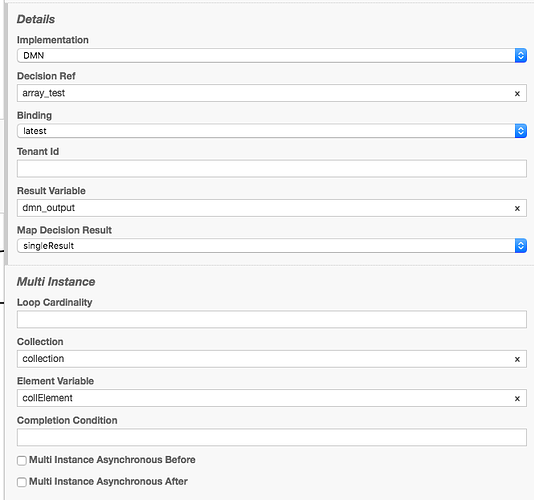 I then used a listener to grab the DMN Output at the end of each execution of the DMN instances. 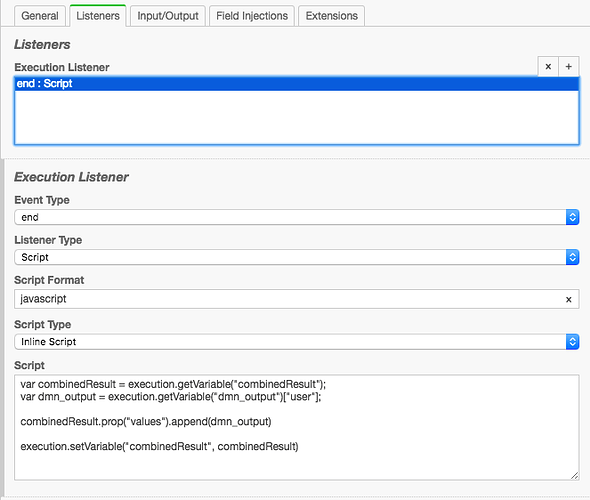 I used SPIN to append the DMN instances output to the “combinedResult” variable. So basically after each instance of the DMN execution, the combinedResult variable would be appended with the DMN’s output value.

I then set the Multi-Instance sub-process to use the array elements as a collection: 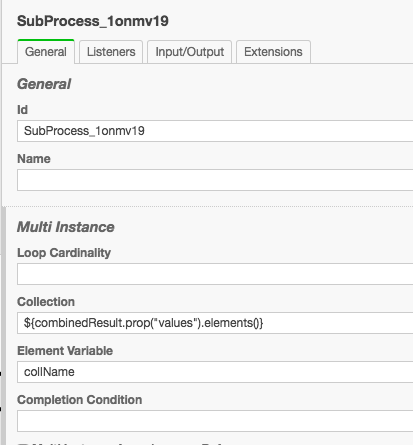 I created simple placeholder User Tasks that were assigned to the same user (for testing purposes) but appended the Element Variable value into the Task Name. 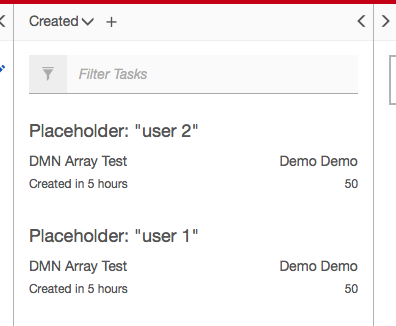 This pattern allowed me to use DMN in basically a “Loop Over a Array of Values and combined DMN instance outputs into a single collection”.

What are peoples thoughts? A better more simple way? I had found reference to this: How can pass multiple values to input variable in request body - #4 by thorben, but it seemed more complicated to manage.
Other than the Execution Listener, there is not “sneaky” usage going on.

Files for anyone that wants to test:

Here is a updated version that uses JSON objects and javascript throughout:

@Niall do you have any insight? Have you done something like this before during consulting?

I used your pattern recently. It works well. And It become a little bit easier if you do it with Java listeners, because you don’t need the type mapping.

I havn’t seen an easier solution to decide on an array of values.

I have also been exploring working with a Collection of Collection, where the inner Collection is evaluated by multiple Input columns. Has some interesting possible use cases such as evaluating a ‘Shopping Cart of Items’, where each item has attributes.

How to return a variable form an embedded form on a multi-instance subprocess
prasadps June 20, 2017, 5:24am #6

I have implemented this pattern. It is indeed a good one and works well.

Do you have any ideia on how to make a contains ANY ITEM between arrays? I have an array of inputs and i need to output only the FIRST rule to have ANY item in my input array.

In this case, it would output SECOND, coz it have the letter B and it is in input array. Im going crazy with this hehe

In your example, you define the Element Variable “collNname” of the multi-instance Subprocess.
I have a similar example (instead of a subprocess I have a normal User Task) and my Element Variable (I call it “orderline”) has the following value:
{"orderlineID":1,"orderlinepages":300,"orderlineprice":50}

I try to access this variable in the task form:

Howerver when the task loads the form I get a message “Loading” and nothing is shown.
It seems like the variable “orderline” is not fetched.
Any ideas why?

@kontrag not sure. I would recommend that you step through your code and iteratively add each line and test to see where it specifically breaks, and once you figure out where it breaks, then attempt to print out raw values without the camForm functions, to see what sort of data you are getting.

It basically provides a in-mem concurrentHashMap and a static helper to perform common actions.

See the docs for example. Note that it would still be up to you to control how to handle failures, rollbacks, etc and clearing out the map. See the unit test and in-line code for further details.

The code examples are in Java Delegates, but of course you can modify them to be used with groovy, nashorn, etc.

I have a same scenario with BPMN. I am facing an issue with ElementVariable in the multiinstance sendTask. I am passing this as an input variable to the task. But getting the below error :

What could be the possible cause?

Post osme pictures of your configuration from the modeler

Thanks for the quick response! Below are the screenshots. Attaching the bpmn as well. 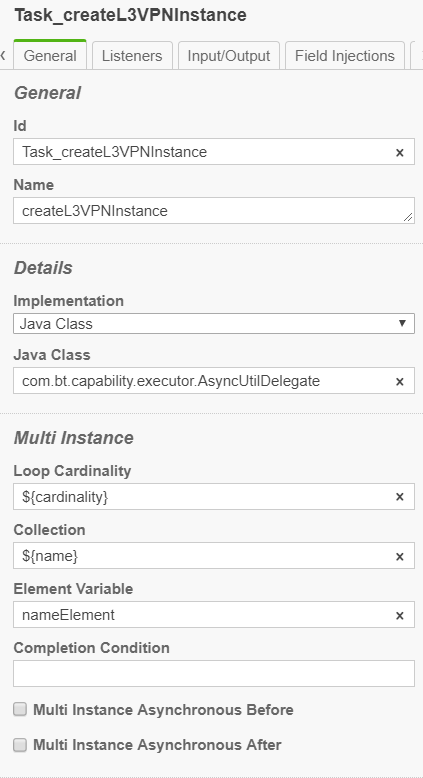 So few things to explain:

Where is the specific error line number? There would be a stack trace in the logs with more info about specifically where the error occurred.

Name is defined as a script task

I then used a listener to grab the DMN Output at the end of each execution of the DMN instances.

I 've been reading your example here and I would like to ask you the following:

In my case where I don’t have a Business Rule Task, what must I define as the output of each instance in order to be grabbed by the End Execution Listener ? 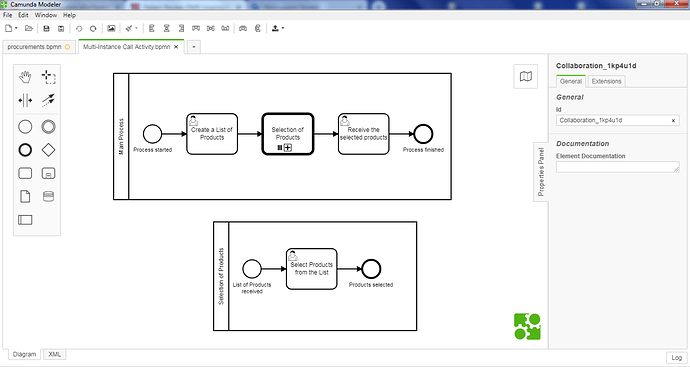 My issue here is that my result variable is unique (my json variable) and every output of my Multi-Instance subprocess is written there.
So, this json value is overwritten after the completion of each instance

@StephenOTT, I think that I found the way but I have to test it in a new deployment to be sure.
As an output of each instance, I’ve defined my json variable (“selectedProduct” in my case) and instead of the “combinedResult” variable of your example, I’ve defined the array of assignees for my Multi-Instance subprocess) which is created in the End Execution Listener of the 1st task (like as your Script task).

I will inform you in any case,
Steve

Hi @StephenOTT and to anyone here.

I ran again my process with my changes (mentioned above) but when I try to complete the first instance of User Task in Subprocess (“Select Products from the List”), the server displays the following error :
SPIN/JACKSON-JSON-01005 Unable to create node for object of type 'Undefined’

What I did here, was to use an End Execution Listener in the Multi-Instance Task of my Subprocess (“Select Products from the List”) in order to grab the values of my created json variable (selectedProduct) on the completion of each instance. I must mention here, that this json variable is created (via camForm function) on the completion of each instance. I don’t know if this fact plays a role for my server error.

A screenshot with the script from my Multi-Instance Task in Subprocess : 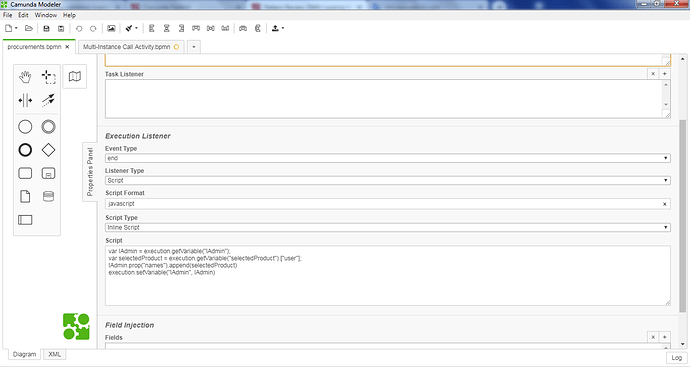 And from my process : 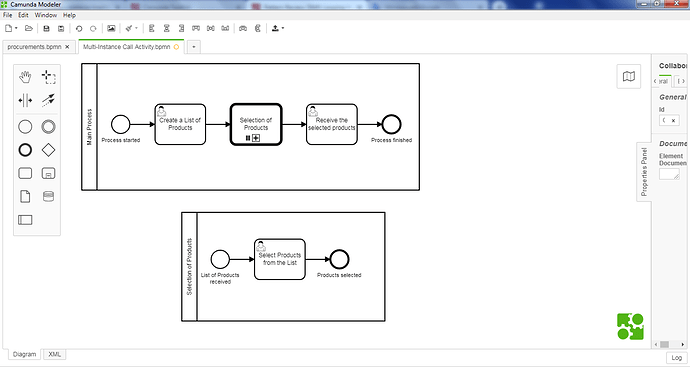 What I’ve been trying to achieve here, is to append the values to this json variable (selectedProduct) on the completion of each instance.

Can anyone help me please ?

Thanks in advance,
Steve

For anyones future reference: here is another way to do the looping but with parallel execution: https://github.com/StephenOTT/camunda-concurrency-helpers-process-engine-plugin

You can use this helper to have the concurrent map update from each of your executions and then update your process variables at the end with the final result.

I’ve been using Maven. Could you please tell me where (into the pom.xml file) must I write your suggested snippet (for installing the plugin as a dependency) and as a consequence the relative dependency ?

As far as the version is concerned, which number must I write and where can I find it ?

Sorry for my many questions here but I’m not so experienced in some aspects.

Thank you very much,
Steve